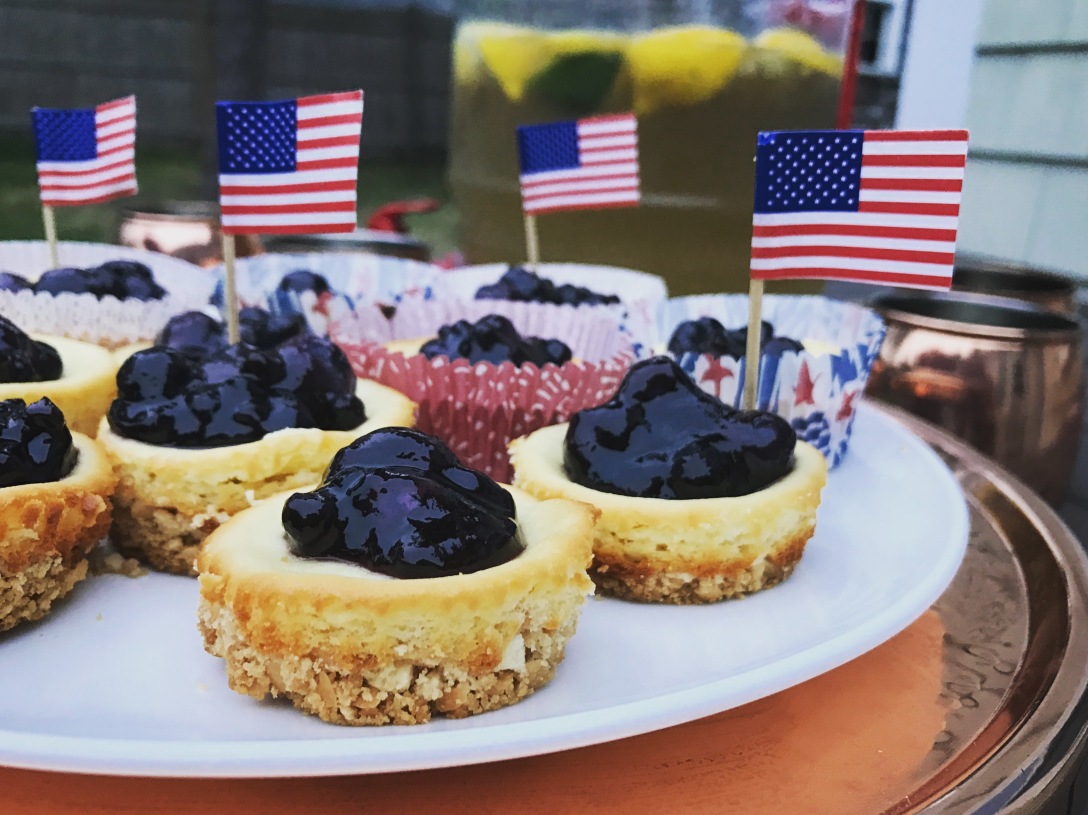 Some of my favorite things to make include: 1. berries and 2. a theme. Lucky for me, this past Labor Day Weekend was our first weekend in Cape Cod and we had people in and out of the house galore! It allowed me the opportunity to try out try out a cheesecake recipe as well as use up a great jar of blueberry jam that I’ve been saving since I was last at Harrods’ Food Hall in London (it’s one of my most favorite, crazy decadent places to go when I’m in London).

After serving them to our third group that stopped by for the weekend, which was my fiancé’s family (it’s just been a month today), my fiancé’s nephew proudly declared he didn’t like cheesecake until his dad explained that it’s not cake made out of cheese (kinda, sorta…) but that it’s sweet and he’d like the blueberries on top (lo and behold he did – phew).

Ingredients:
For the Crust:
6 oz of Nilla Wafers (half of a box), crushed into dust
4 oz butter (half of a stick)

Directions:
Preheat the oven to 350 degrees and line your muffin tins with paper liners.
For the crust, combine butter and Nilla wafers until all the crumbs are coated.

Place a tablespoon in each of the muffin cups and press firmly. Bake in the oven for 10 minutes to firm up the crust, remove, and set aside.

To make the cake, mix together the softened cream cheese, sugar, egg, and vanilla extract until smooth. (Note: the cream cheese needs to be softened – if it’s just out of the fridge, your batter will turn out lumpy. I’ve been guilty of this cheesecake sin and had to strain it through a sieve).

Pour the cake mix into the prepared crusts and bake for 20 minutes or until the top of the cheesecakes just start to turn golden.

While the cheesecakes bake, mix jam and blueberries in a separate bowl. After the cheese cakes are cooled to the touch, top with a spoonful of blueberry sauce and serve. (Note: I took some of mine out of the cupcake liners so you could see what the bottom looks like, but feel free to leave them in or out).

View all posts by ashleyyehl