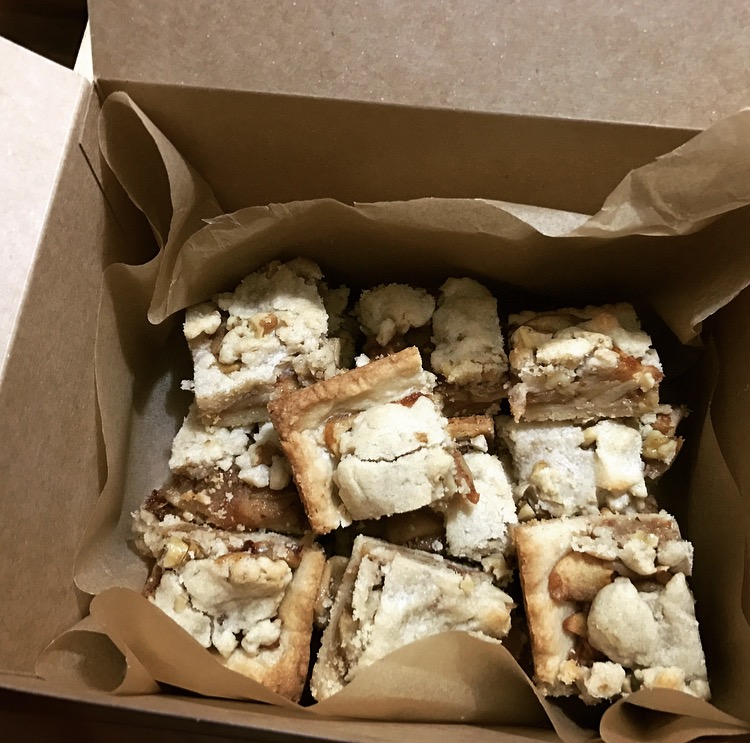 My fiancé and I were getting ready to leave Cape Cod for North Carolina to spend Thanksgiving with my parents so we were running through whatever produce we had left in the house and voila: apple bars!

The great thing about these is that I already had everything in the fridge and pantry which I LOVE in a recipe (if you haven’t noticed, I’m not big on fussy) so these were perfect!

The night that we were leaving town, we had a town meeting to stop by so it was a perfect place to drop these babies off. Now, my fiancé thinks that the best part of an apple pie is the bottom crust for its thickness, softness, and decadent warm fall spices like cinnamon and nutmeg from the filling. I’m going to be bold and say that this beats most apple pie recipes, because structurally the buttery streusel -dough top crust mirrors the bottom crust of an apple pie and it’s easily more transportable than your — you can bring these on the go and munch on them wherever you are.

For the crust, mix butter, sugar, brown sugar, and vanilla in the bowl of an electric mixer and beat on medium speed for 2 minutes, until light and creamy. Sift the flour and salt together and, with the mixer on low, slowly add to the butter-sugar mixture, beating until combined. Press 2/3 of the dough into the bottom and 1/2 inch up the sides of a greased 9×9 pan. Refrigerate for 20 minutes. Bake for 18 to 20 minutes, until the crust is golden brown, and set aside to cool.

Meanwhile, put the mixing bowl with the remaining dough back on the mixer, add the walnuts and cinnamon, and mix on low speed to combine. Set aside.

Reduce the oven to 350 degrees.

For the apple filling, combine the apples and lemon juice in a very large bowl. Add the granulated sugar, cinnamon, and nutmeg and mix well. Melt the butter in a large sauté pan, add the apples, and simmer over medium to medium-low heat, stirring often, for 12 to 15 minutes, until the apples are tender and the liquid has mostly evaporated. Spread the apples evenly over the crust, leaving a 1/2-inch border.

Pinch off medium pieces of the remaining dough and press with your fingers to flatten.  Place them evenly on top of the apples (they will not be completely covered). Bake for 25 to 30 minutes, until the topping is browned. Cool completely and cut into bars.

View all posts by ashleyyehl